I have just published a very different book, the history of the charming late 18th, early 19th century small village, Letham, in North East Fife in Scotland where I was born and grew up.

Until the 20th century, Letham was a self-sufficient village with two farms, three schools, three pubs, five shops, a village hall, a bakery, a brewery, a saddler, a blacksmith, a joiner, a doctor and so on.

This book gives a detailed history of many of the houses and businesses as well as the lives of several of the inhabitants from the Baronet of Letham to the Monimail Hermit.

There was nothing sleepy about Letham, from resurrectionists at the cemetery in the 1820s, to an infamous murder in 1830 and to being bombed twice in World War Two. Letham has its very own tree, the Deodar Cedar brought back from the Himalayas in the 1820s by the Hon. William Leslie-Melville who resided at the nearby Melville House. This house played a very secret role in World War Two being the headquarters for the Auxiliary Units, soldiers trained in guerrilla warfare in case Britain was invaded by the Germans. SOE agents were also trained there.

This book has 115 photographs most of which have never been published before and not a gun is mentioned anywhere!

Price £30 plus postage. Please e mail me if interested. 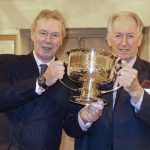