Donald Dallas, the prolific author of books on the history of gunmaking was presented with The President’s Cup and The President’s Gold Medal at Holts auction in London on the 11th December 2018. This cup and medal were awarded by the Historical Breechloading Small Arms Association “For the most outstanding contribution to small arms research”. The award was made for Donald’s eleventh book, Alexander Henry, Rifle Maker published in 2017. The President’s Cup is only presented when a book of sufficient merit is published and the H.B.S.A deemed his book on Alexander Henry to be a worthy winner. 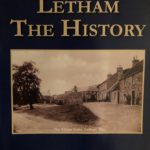